WebApplicationContext in the stand-alone application

Recently I got stuck with a problem of starting WebApplicationContext within a stand-alone java application. This is not so obvious as I expected. This article will be useful in a theoretical aspect - it shows how spring contexts work under the hood. Most likely you don’t need to use such approach (more details in the conclusion)

Let me describe the evolution of that application. It was a stand-alone java application without spring for a long time. We had embedded jetty, few pure java servlets and web services on top of CXF. And the main problem of that architecture was code complexity and a lot of problems with code testing. We decided to reduce code complexity using IoC and DI. For that time, most of my experience was related to spring framework. That why we picked it and rewrite most difficult parts using spring framework with XML configuration, annotation-based dependency injection, java-proxy-based AOP. And it was good.

Then I got a request to implement a web equivalent for the part of our swing interface. After research, “thin server” looked less time-consuming and more flexible.

Thin server architecture. A SPA moves logic from the server to the client. This results in the role of the web server evolving into a pure data API or web service. This architectural shift has, in some circles, been coined “Thin Server Architecture” to highlight that complexity has been moved from the server to the client, with the argument that this ultimately reduces overall complexity of the system.

Honestly, I implemented not pure ‘Thin server architecture’, I left some logic on the server. Anyway, I built API on top of spring mvc. The first try looked like:

It’s the original application context. I put all beans, including controllers, in one XML file. And it doesn’t work. Actually, it compiles and works unless you try to call some of the RESTful methods. When you call a RESTful method, an instance of WebApplicationContext will be created in DispatcherServlet#initWebApplicationContext. It’ll set null as a parent context and all ApplicationContextAware will get new context as well as @Autowired fields in newly created beans. It means that even singletons will become non-singletons.

This interface adds a getServletContext() method to the generic ApplicationContext interface, and defines a well-known application attribute name that the root context must be bound to in the bootstrap process.

The main idea of this context structure is binding each bean from web context to the appropriate servlet context. Therefore, it gives extra scopes like: “globalSession”, “request”, “session”; which aren’t available in ApplicationContext. 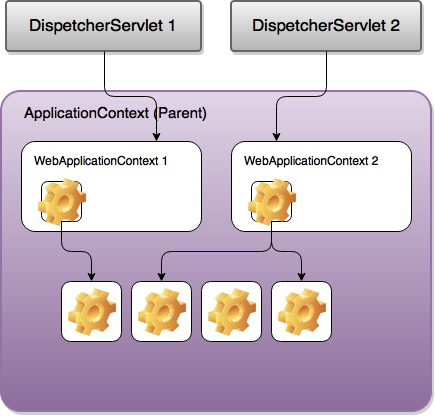 My case can be covered by XmlWebApplicationContext. I wrote it in this way:

In this article I described a not standard approach for contexts’ initialization; it was required by the application architecture. In most cases, you should use initialization via web.xml/WebApplicationInitializer for web application, or regular ApplicationContext for stand-alone applications. Moreover, since Spring Boot is released, you can get rid of all context initialization problems.